What a privilege to be here today to Install Bishop Ray Sutton as the 17th Presiding Bishop of the Reformed Episcopal Church!

This is a man, like many of you, that I have come to deeply respect, love, and honor as a father in the Lord.

His compassion, his scholarship, his vision, and his desire for unity in the Body of Jesus Christ makes him the ideal person to servant-lead the Reformed Episcopal Church in this next season.

As an integral part of the Province of the Anglican Church in North America, the Reformed Episcopal Church brings a depth of spiritual, historical, and ecclesiastical substance to the ACNA.

And I am grateful to have a such a man as Bishop Sutton at the helm.

I hope you will join me in interceding for him (and Susan) in an intentional and on a regular basis. 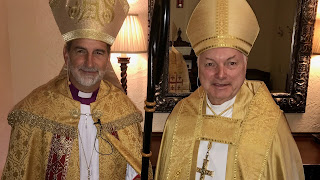 A native of Kentucky and a Dallas resident since he was 13, Bishop Sutton received his Bachelor of Fine Arts from Southern Methodist University and his Masters of Theology from Dallas Theological Seminary. From 1976 to 1991, he served as a parish minister. Following this, he pursued doctoral studies in an associated research program at Wycliffe Hall, Oxford with Coventry University, from which he received his Ph.D.

He became the Dean and Professor of New Testament at the Reformed Episcopal Seminary in Philadelphia, and continues as an adjunct professor today. Later, Bishop Sutton functioned as Dean and Professor of Theology at Cranmer Theological House, where he continues to teach. He has also authored four books on theology, his most recent being Signed, Sealed and Delivered: A Study of Holy Baptism.

Bishop Sutton is married to Susan Jean Schaerdel of Dallas, a fellow graduate of Southern Methodist University. The Suttons have seven children and four grandchildren. The Suttons live in Dallas where Bishop Sutton’s residential offices are at the Pro Cathedral of the Church of the Holy Communion.