Bringing God's love and hope to the South Side of Pittsburgh

Still another man is fondly reminded of family by the tattoos across his thumbs–his parent’s real signatures inked into his skin in small lack lettering. A

filmstrip unrolls down the arm of an aspiring filmmaker, flanked on all sides by movie imagery–a camera, a clap board–that integrates into the scene that stretches from bicep to wrist. And in black, looping script, the Italian word “Avanti!” curls around the inside of a woman’s wrist, reminding her to “go,” to “move ahead” no matter what. Pirate skulls and thorny roses, movie characters and symbols in ancient languages: Each tattooed line, stretching out to create a word or an image, forms a reflection of the soul that lies beneath the skin. They are voices communicating the desire that burns at the human center: “I want to be heard–I want to be known.”

South Side is the party-area of Pittsburgh, culminating on Carson street with dozens of tattoo parlors and 90 bars in a 2 mile radius. For Kate and Sean Norris, the tattoo culture in the community has become an opportunity to connect with the authentic heart of the people they are called to in ministry. “The South Side is full of people who don’t think that Christianity has anything to say to them,” Sean explains. “They’re burnt by the idea that they have to be something else besides what they are before God will love them.” Into this culture, the message South Side Anglican wants to communicate is that God is personal. He knows people intimately, hears them, and wants to meet them in the midst of their story. Connection with a personal God has been at heart of the forming of Southside Anglican Church, as Kate and Sean have found God using their existing gifts to build the kingdom.

Returning to the church they attended through college, The Shepherd’s Heart in uptown Pittsburgh, after Sean’s 2010 graduation from Trinity School for Ministry in Ambridge, Kate and Sean had no ambition of planting a church, but felt passionate about starting a ministry of outreach. 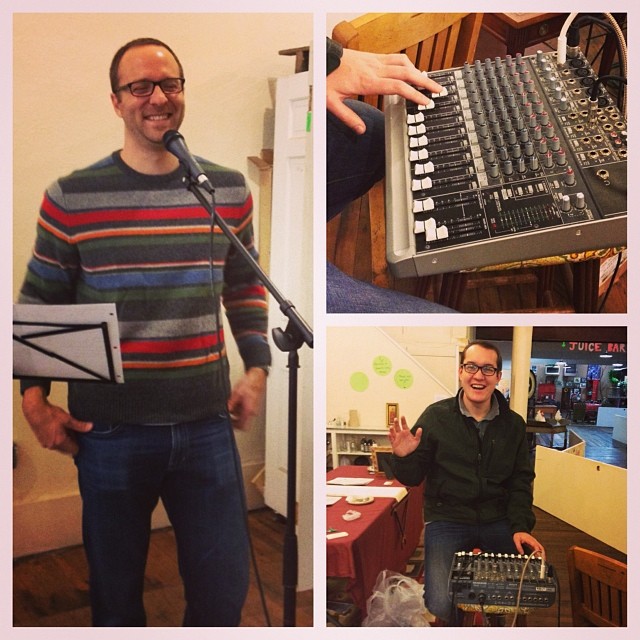 It was partially through Kate’s talent as a painter that God began to draw them towards Pittsburgh’s South Side: she felt connected to the visual aspect of the area, primarily expressed through tattoos, and followed God’s leading to create an exhibition called “Hear Me.” The installation, housed at a local coffee shop called Delanie’s and well received by the community, was comprised of tattoo photographs and stories collected from people in the South Side area. Sean, a musician and songwriter, also found God opening doors through the use of his gifts as he started to orchestrate open mic nights at various places in the community. “You can start with what you’re passionate about,” Sean relates a sentiment often spoken in the South Side Anglican community. “You will find other people who are passionate about that too, and God will use that to make connections.”

Faithfully engaging the community through personal passions was the Norris’s starting point for communicating their desire to know the people of Southside, and continues to opens doors for them to live out the pursuing love of God. Whether it is the public pronouncement of a passion through a tattoo or a more subtle interest in music, art or culture, passions create a common community and Kate and Sean desire to bring the Gospel to these connected groups of people.

As their ministry to this unique area began to get traction, it was clear that a new faith community was 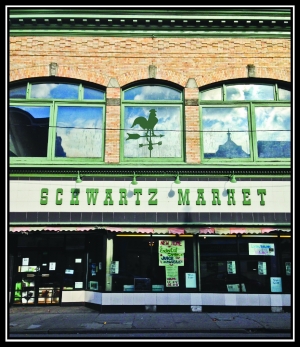 beginning. Sensitive to the unique personality of the area, Kate and Sean were eager to find a “neutral” meeting place for the church that would feel safe to people in the area who often carry baggage about God and spirituality. Through God’s provision, they found favor with the owner of the historic Schwartz market, Elisa, who is a non-practicing Jew, and very open to a “spiritual presence” in her building.

As the Norris family has worked to provide safe spaces for story-sharing and relationship-building, they have seen God show up in transforming ways. A friend and tattoo-shop owner brought his girlfriend to their seeker-friendly Bible study at Delanie’s, and as they walked through the letters of Paul, she began to see a discrepancy between her definition of faith and the Gospel’s. She had been burdened by a belief that she had to “have her act together” to come to God, and was exhausted in her striving to be good enough. As they walked through Romans, she found these beliefs challenged, and as her concept of God’s love began to change, her countenance became lighter. This freedom of spirit and relief from anxiety is a consistent mark of the Gospel message being shared through the South Side community. People burning out in 12-step groups, or post-college folks responding to the challenges of life by numbing out through alcohol and partying, have been impacted by the story of a God who pursues rather than waits to be pursued, whose grace finds people where they are.

Sunday services at Schwartz market are attended by a mix of Christians and non-Christians, and they are only a small part of the outreach to South Side. 12-step programs, home-groups, Bible studies, and other initiatives like cooking nights, single’s groups or an Anglican brewing club, are often lay-lead. These evangelistic events have been effective in welcoming people into community, especially those who are not ready for church and would ordinarily not find themselves in relationship with Christians. It is important to Kate and Sean, to empower lay people to take ownership so that the vision of the church is sustained by a group of people rather than dependent on ordained leadership alone.

Music, art and ink mark the church that meets in the Schwartz building on Carson street, at the heart of South Side, Pittsburgh. If the call of this community is “hear me,” South Side Anglican Church and the Norris family, dedicated to serving the colorful, unique, often desperate lives of the people, are proof that our God has heard and he is here to bring redemption, transformation and hope.