“They are my best friends. The people I want to be around. I just couldn’t ask God for anything more.” This is how The Rev. David Hanke describes the people of Restoration Anglican Church, the church he planted in Arlington, VA. At the heart of their proclaimed values at Restoration are the beliefs that “The Gospel Changes Everything and the Gospel is Catalyzed by Community.” It is obvious in talking with Rev. David that these ideals are more than just written values at Restoration, they have formed the foundation of a great move of God. 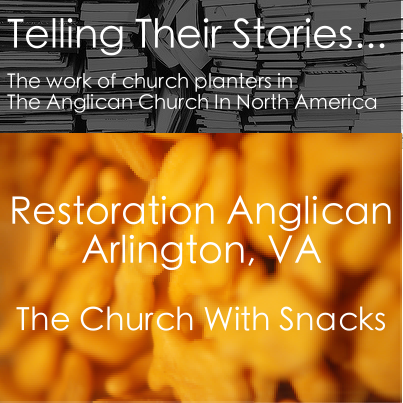 Restoration is affectionately known as “the church with snacks” because of the fondness the congregation has for the fellowship time after the service. “We have folks milling around the church property talking and laughing- every week, all year!” says David. In a highly sophisticated and educated community, “snacks” seem like an unlikely basis for a church plant. It doesn’t seem innovative or sexy or trendy or complex enough. But at Restoration, they know that God uses the simple things of this world to do profound things- even in the high-energy, high-powered community of Arlington.

Arlington, Virginia is the first county across the Potomac River from Washington DC. The city has a large commuting demographic with many government employees, lawyers, and people serving NGOs. Arlington also has a thriving local business scene along with vibrant neighborhoods and excellent schools, so there are teachers, small businesspeople and professionals in the community as well. It is in this context that Restoration Anglican Church, and their snacks, have been transforming lives, serving locally and internationally, and preaching the good news of Jesus Christ for the past four years.

The process of planting of Restoration finds its roots less in a strategic plan to plant in the area surrounding Washington DC and more in the gracious sovereignty of God and an honest affection of a man of God for a people to whom he is called. The Hankes relocated to Washington DC after David graduated from Gordon Conwell in 2006 to serve at The Falls Church Anglican in their clergy development and training center: the Timothy Program. When the Hankes arrived, they moved into a house they had agreed to live in sight unseen, in a neighborhood they had never explored, in an area they were not largely familiar within the community of Arlington. To their great joy, God immediately grew in them a deep love for the people of their neighborhood, which consisted mainly of folks alienated from church. David describes the people as, “not necessarily hostile, but they are disconnected and often times have previously had bad experiences in church.” As the Hankes fell in love with these neighbors they often prayed, “God, who will care for the people of Arlington?” 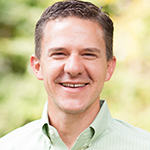 Through his time at Falls Church, the affection for the people of his neighborhood led to the discernment that David and his wife Laurel were called of God to plant a church in Arlington County. David says that the vision was not to simply plant a “more convenient satellite campus of The Falls Church,” but a new work, “one tailored by the Lord to extend his kingdom in a new context.” So David, with the blessing of the Falls Church, began to speak with a number of friends he had developed over two years as a Timothy Fellow and asked if they would be willing to be part of a core team to help plant a new church in Arlington. God again showed his faithfulness and gathered a group of people who would form the foundation of a new church plant.

After spending around six months in a vision casting and community building phase for the core group in the end of 2008, Restoration launched in January 2009. At the first service, there were approximately 60 people, meeting in a space that could fit 120. Since then, God has blessed the work tremendously. Within a few years they needed three services on a Sunday in order to serve approximately 450 people. They are currently in the midst of building a facility that they hope to occupy in 2014.

The fruit of Restoration, however, cannot be measured in numbers or facilities. What is to be celebrated is the unquantifiable transformation of lives that God has brought in their community. “Over the last four years,” David says, “many people have been restored to the community of Jesus. They’ve come back into a right relationship with Him and to a place of trusting the church again. Some have been restored physically in healing, or emotionally in healing. You see, in a place like DC where life is a grind, political, and often involves using people to get ahead, Restoration is a place to be honest about what God is doing in life, a place for people to stay connected with God and each other, to be reassured that Jesus never leaves them and is working in the areas they’re hoping to be changed.” In a community of the upwardly mobile, Restoration is helping people realize the height, width, length and depth of God’s love.

“We are not particularly innovative,” David says “but God has brought the right resources and people together at the right time to accomplish something wonderful for his glory.” Their strategy has simply been to make Sundays a place that is easy to connect with God and to make friends, and then to disciple the people well. In a highly transient area like DC, the people are looking for community. Making an easily accessible relational environment has allowed for those who were far away from God to have a safe context to explore the claims of Christ with people that they enjoy. Restoration is reaching their community through basic shared human needs. It is simple: even the most educated, motivated and aggressive among us need snacks, and people to eat them with. When those people who share our snacks also share a common faith, those new to the table have the opportunity to meet the affable host, converse with him and form a new relationship.

Restoration, however, doesn’t just gather people in a friendly community to be safe and happy. David is bold in his assertion that the Gospel is preached in Word and Sacrament and that the people must be sent out to do God’s work in the world. He says, “We have a holistic view of transformation in which we believe that the Gospel has an effect on every aspect of life and society. We believe that everyone is called to a vocation and that God wants to use people in their specific vocation to bring about Gospel change.” So, Restoration is about creating a space for God to transform lives, and to send out those changed lives in their context within one of the most influential cities in the world in order for the process of Gospel change to continue in people, in government, in systems, in policies and in hearts. Or as David says, “we want our people to do their thing for the glory of God.”

There is a great deal to praise God for in the story of Restoration Anglican Church. It is the story of God’s faithfulness in placing, calling, gathering, providing and sending. It is a story of a family that was obedient and has been blessed with great fruit in their labors. It is a story about a church planter who has not been crushed by the grind of planting, but is surrounded by a loving and faithful group of people who are seeing God do amazing things in the shadow of one of the most powerful cities on earth. The “church with snacks” is allowing the people of Arlington, VA to taste and see that the Lord is good.